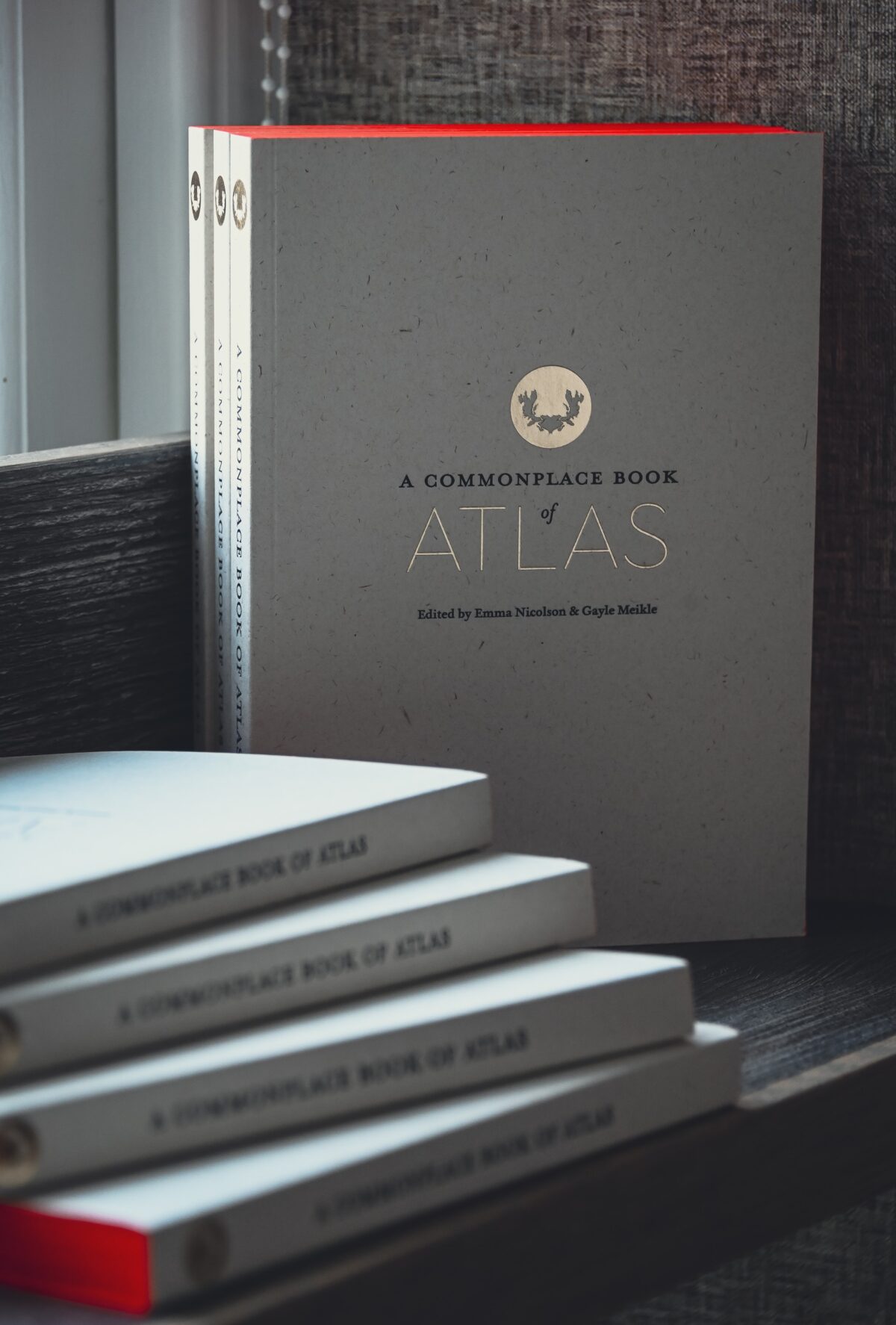 A Commonplace Book of ATLAS

This book has been created as a marker of a moment in time, compiled over several years, it charts the first eight years of our practice. Edited by Emma Nicolson and Gayle Meikle, the book brings together over 25 contributions containing beautiful illustrations, documentation and rich reflections. It is a history and book to hold dear, and a grounding for ATLAS’s present and future. 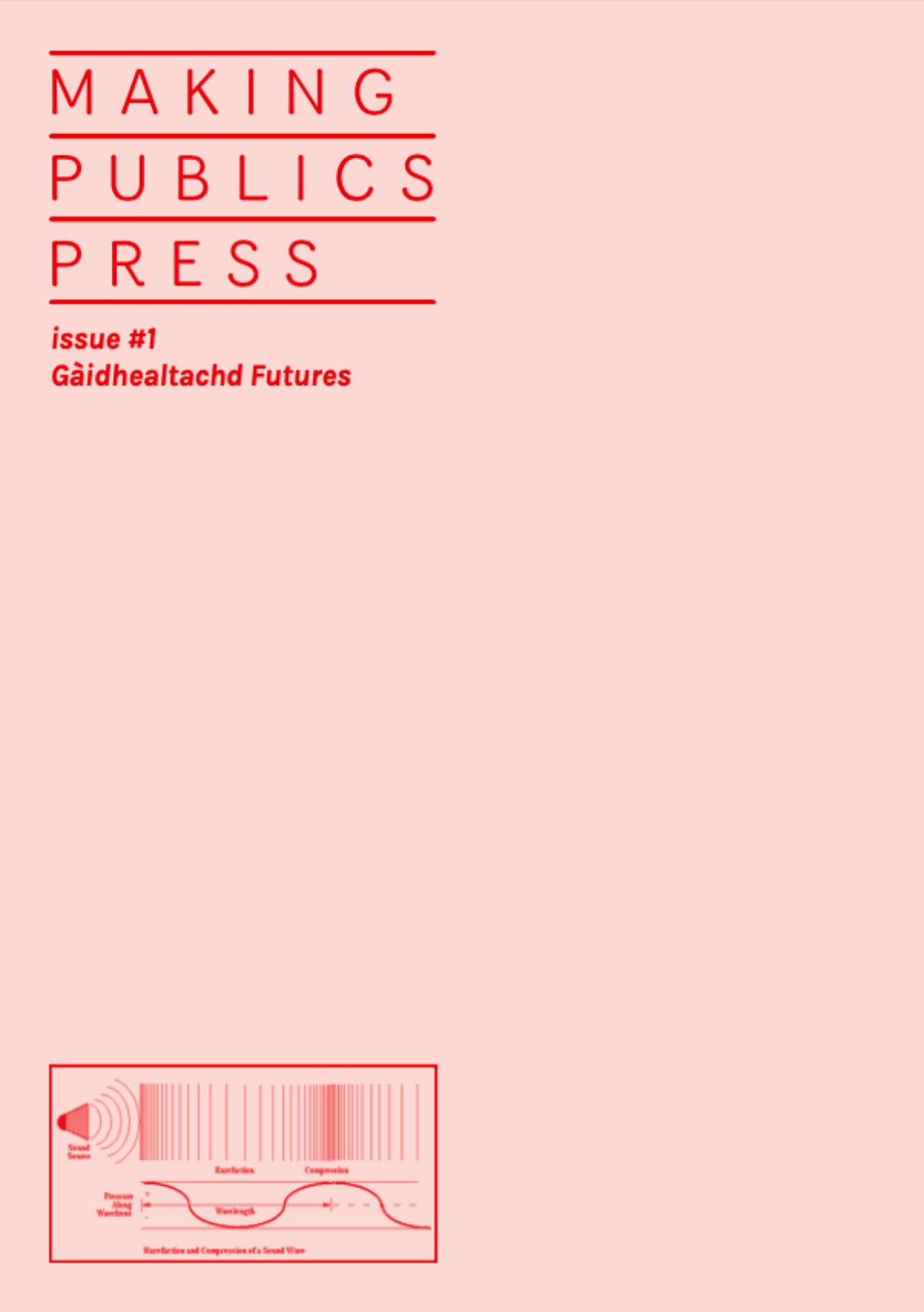 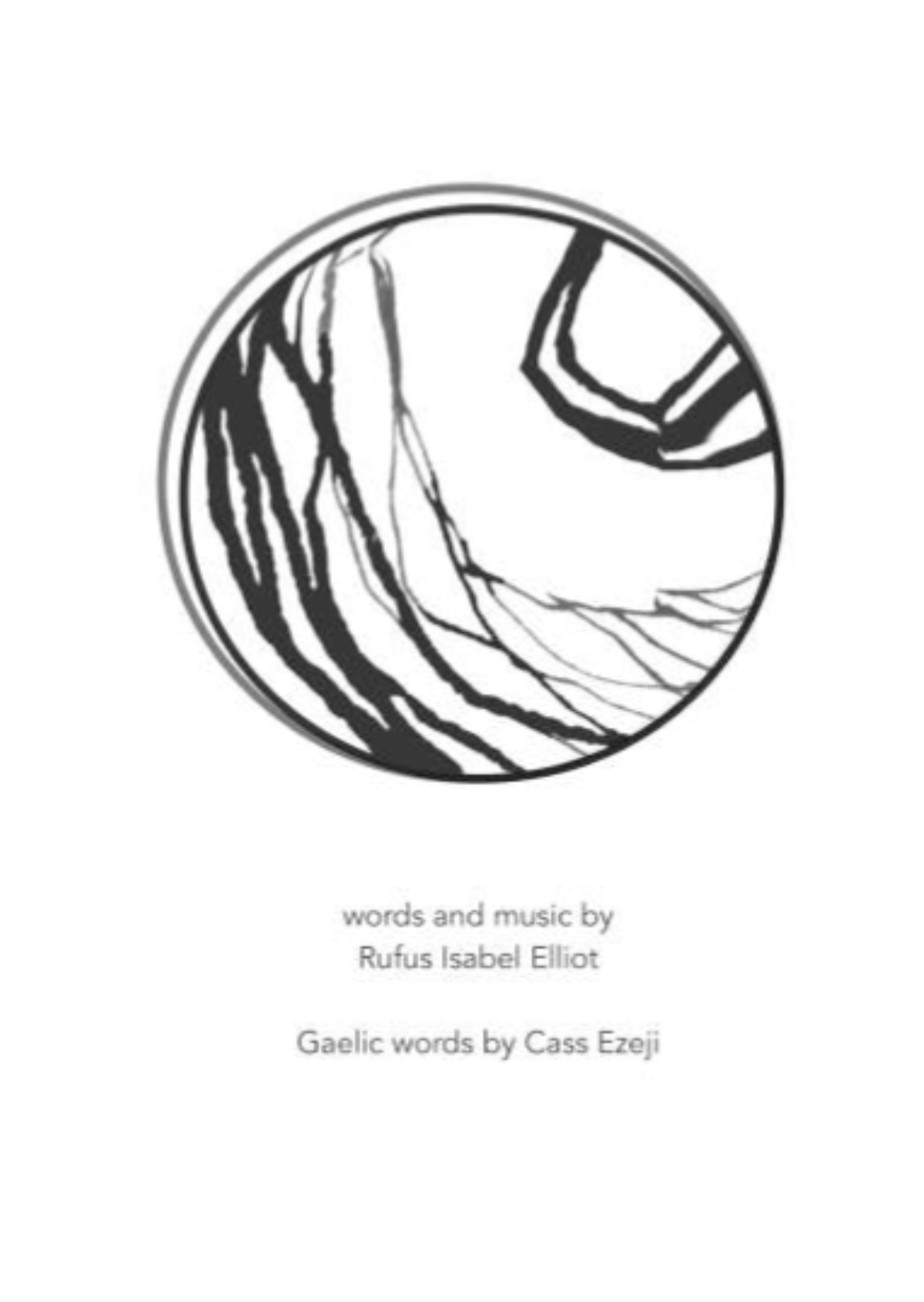 A new text by Rufus Isabel Elliot which imagines a new mouthful-of-sand future-language of the North West Highlands, spanning Older Scots and Middle English, presented alongside a new, specially commissioned Gaelic interpretation of the text, by Cass Ezeji.

Cass Ezeji is a singer, writer and linguist from Glasgow. As a Gaelic speaker, she seeks to fill the historical voids that omit the experiences of Gaels of African heritage. She has written for Scottish Affairs journal, Map magazine and Mother Tongue. 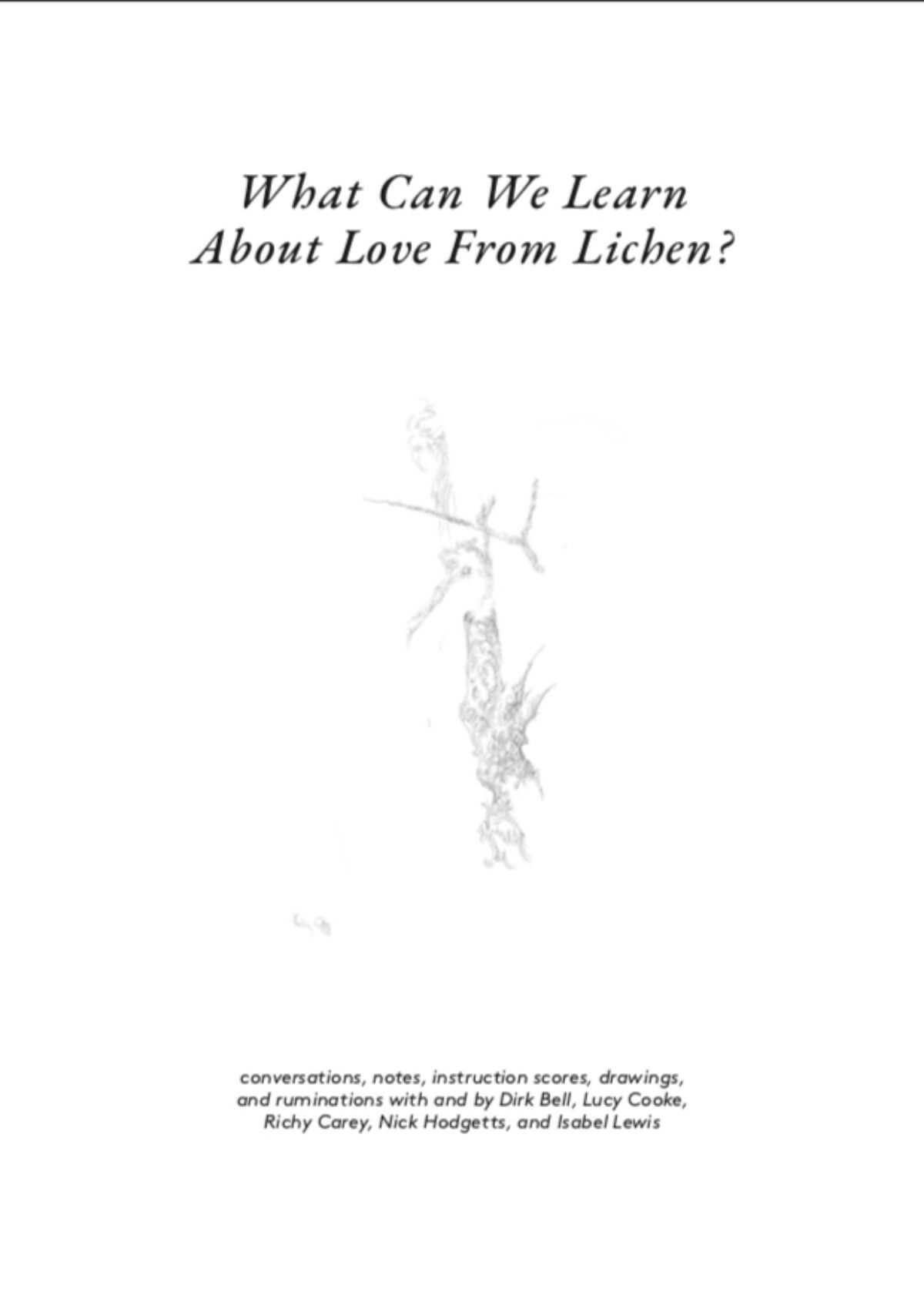 What can we learn about love from lichen?

A specially created publication of scores, drawings, writing, interviews and stories weaving together knowledge from What can we learn about love from lichen? With contributions from Isabel Lewis, Richy Carey, Lucy Cooke and Nick Hodgetts and illustrations by Dirk Bell. Available here. 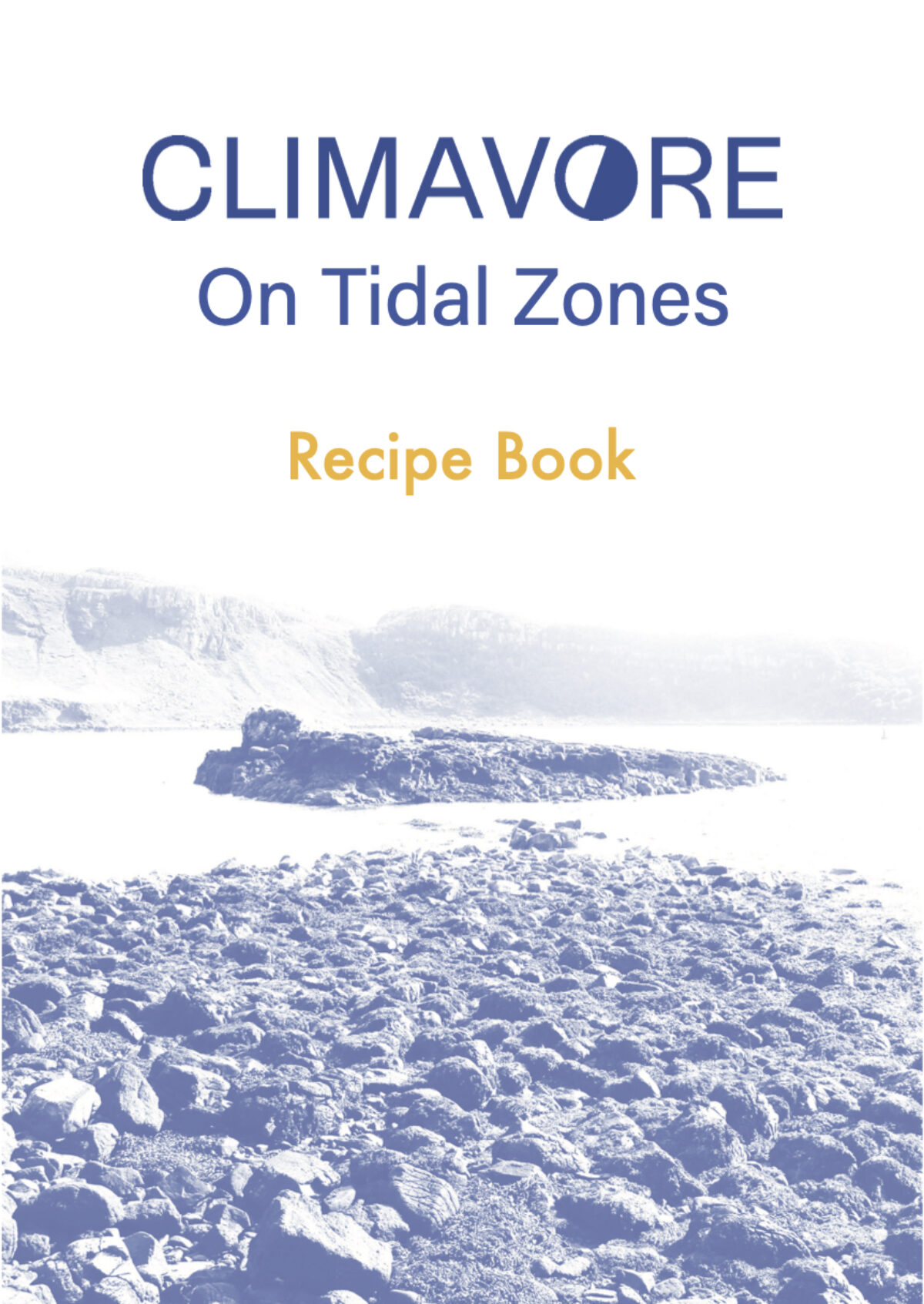 Designed by Raasay based artist Finn Croy this zine-book includes tips and advice on how to forage and create your own CLIMAVORE inspired recipes using intertidal ingredients, plus specially developed recipes by CLIMAVORE apprentices and partners from across Skye. 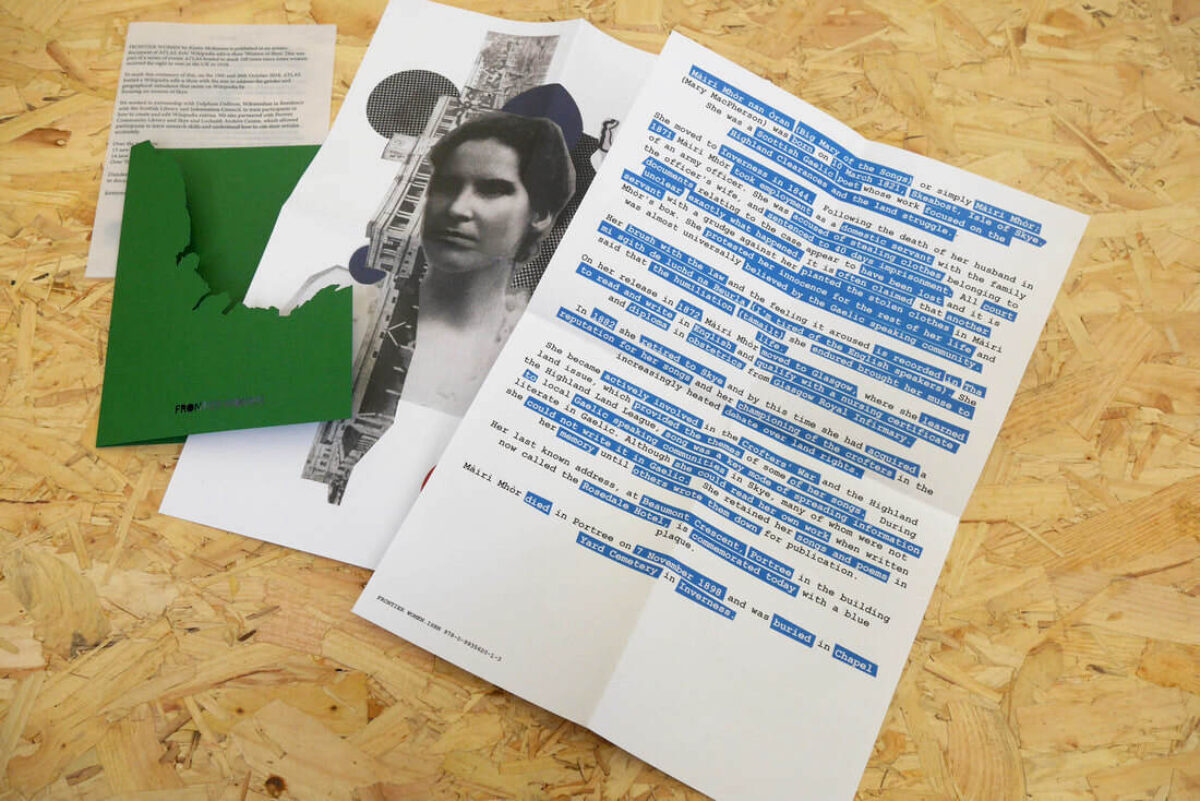 In October ATLAS held a Wikipedia ‘edit-a-thon’ to address gender imbalance on Wikipedia, with the specific aim to create articles for women of Skye who have been overlooked, and to expand existing content for those who already feature. Working with Skye and Lochalsh Archive Centre and Portree Community Library we were able to explore first-hand accounts and secondary sources, exploring publications and writing of historic women as well as those who are alive today. This Zine was produced by Kirsty McKeown to mark the event. 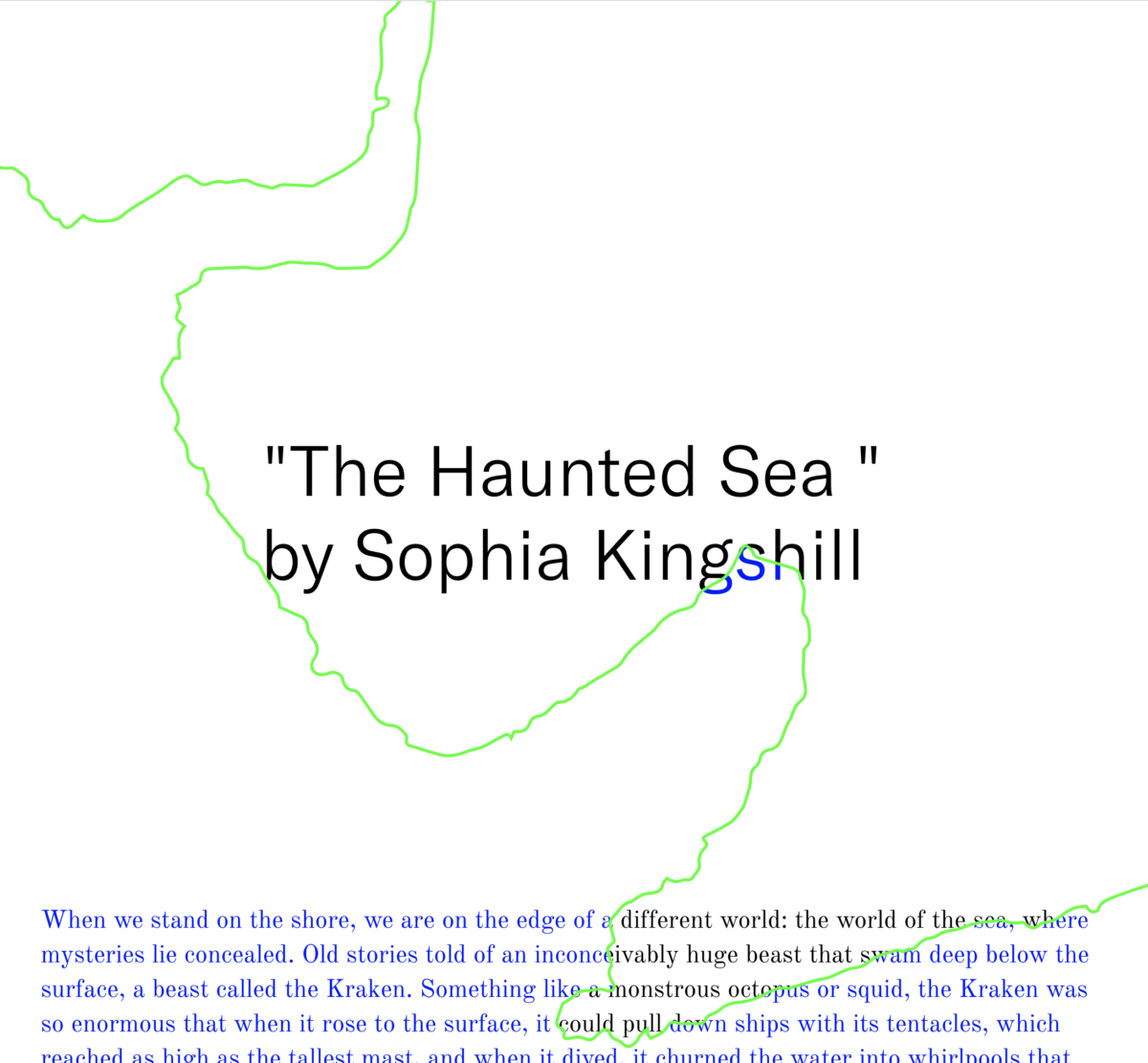 In collaboration with Katie Paterson’s First there is a Mountain project, Twenty-five new pieces of writing were commissioned, corresponding to each beach location. The diverse writings connect with each locality, relating the artwork to the place, its people, its history and the wider geological context. The artist invited Sophia Kingshill to write for Glenbrittle Beach. Her text, The Haunted Sea, was read out as part of the event. 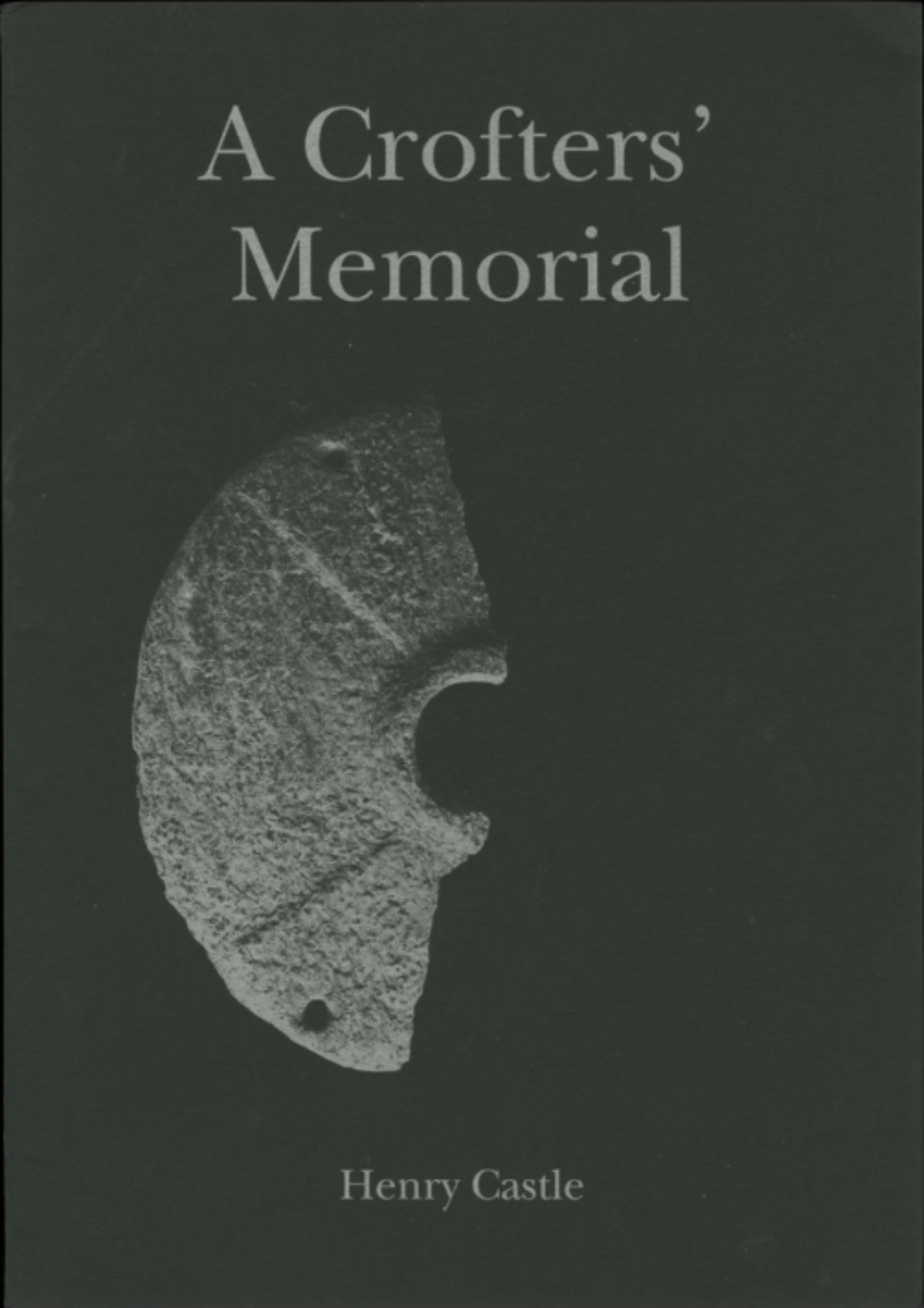 Since 2014, ATLAS Arts has been working with the Staffin Community Trust (Urras An Taobh Sear) to produce a series of pilot commissions with a view to creating a contemporary memorial to acknowledge the nineteenth-century crofters’ land struggle in the Staffin area. From conversations with local crofters, academics, studying archival documents, and visiting sites of significance: Henry’s research became focused on the history of Loch Leum nam Bradh and the significance of quern stones to the crofters in the area at the time of the uprisings.s 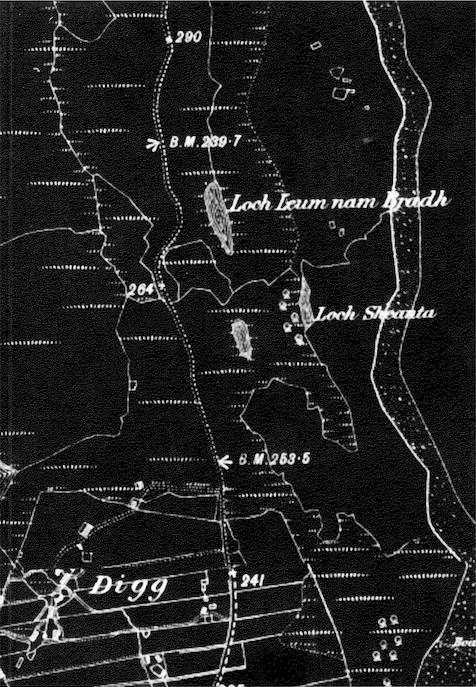 Translates to: Loch of the Leaping Quern Stones. This publication follows the progression of the two artists’ investigations and possible outcomes in four distinct chapters; research, engagement, artistic responses and interactive interpretation. Produced in partnership with Urras an Taobh Searthe (Staffin Community Trust). 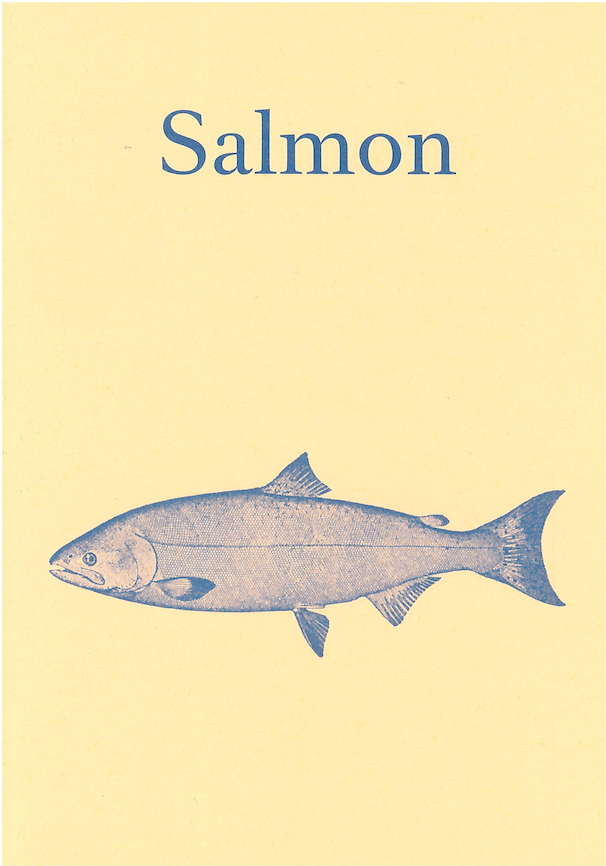 This text by Roger Hutchinson illuminates the history and context of the tidal zone in relation to the iconic Scottish salmon, and connects it in particular to the more recent past around Bayfield in Portree. Coinciding with CLIMAVORE: on Tidal Zones. 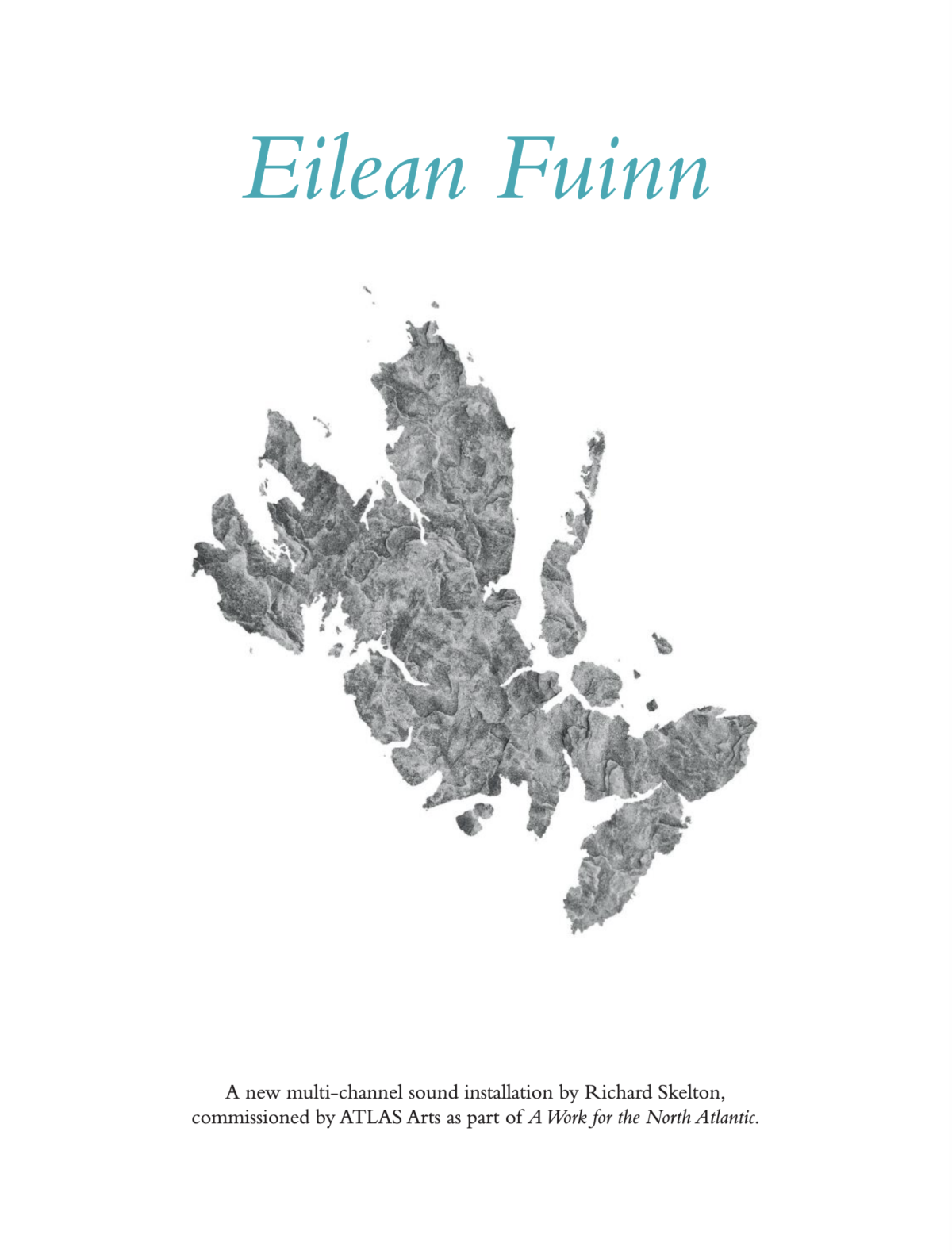 A publication marking Richard Skelton’s project Eilean Fuinn. Installed in the Scorrybreac Boathouse, Portree, this evolving sound work comprised four discrete channels of sound, each repeating over long durations (between one and two hours) but at variance with one another, subtly changing over the course of its installation. This multi-channel composition responded to Bethan Huws’ film Singing for the Sea, and the landscape that formed its temporary backcloth,

ATLAS Arts has collaborated with local walking groups and artists to curate a series of walks around the Isle of Skye and Lochalsh. Walking has been the source of inspiration for artists, poets, writers and thinkers for generations. This programme connects community, art and the environment through a series of walks designed to highlight different areas of Skye and Lochalsh and introduce participants to the work of local artists and how the environment inspires their creativity. 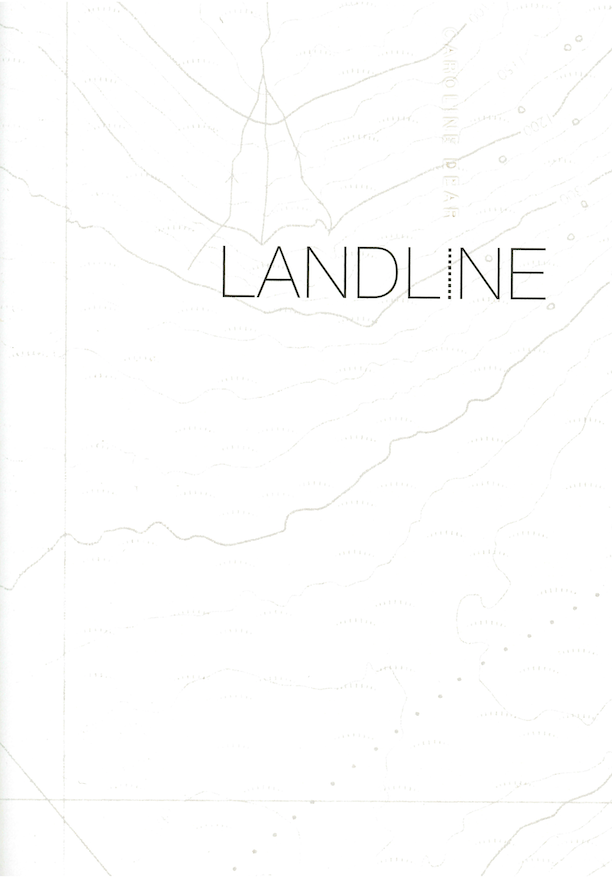 Land Line is a series of five walks over five days, offering a unique chance to explore our relationship with the landscape. Led by Skye-based artist Caroline Dear, each features a specifically invited collaborator and encourages observation and conversation of context. 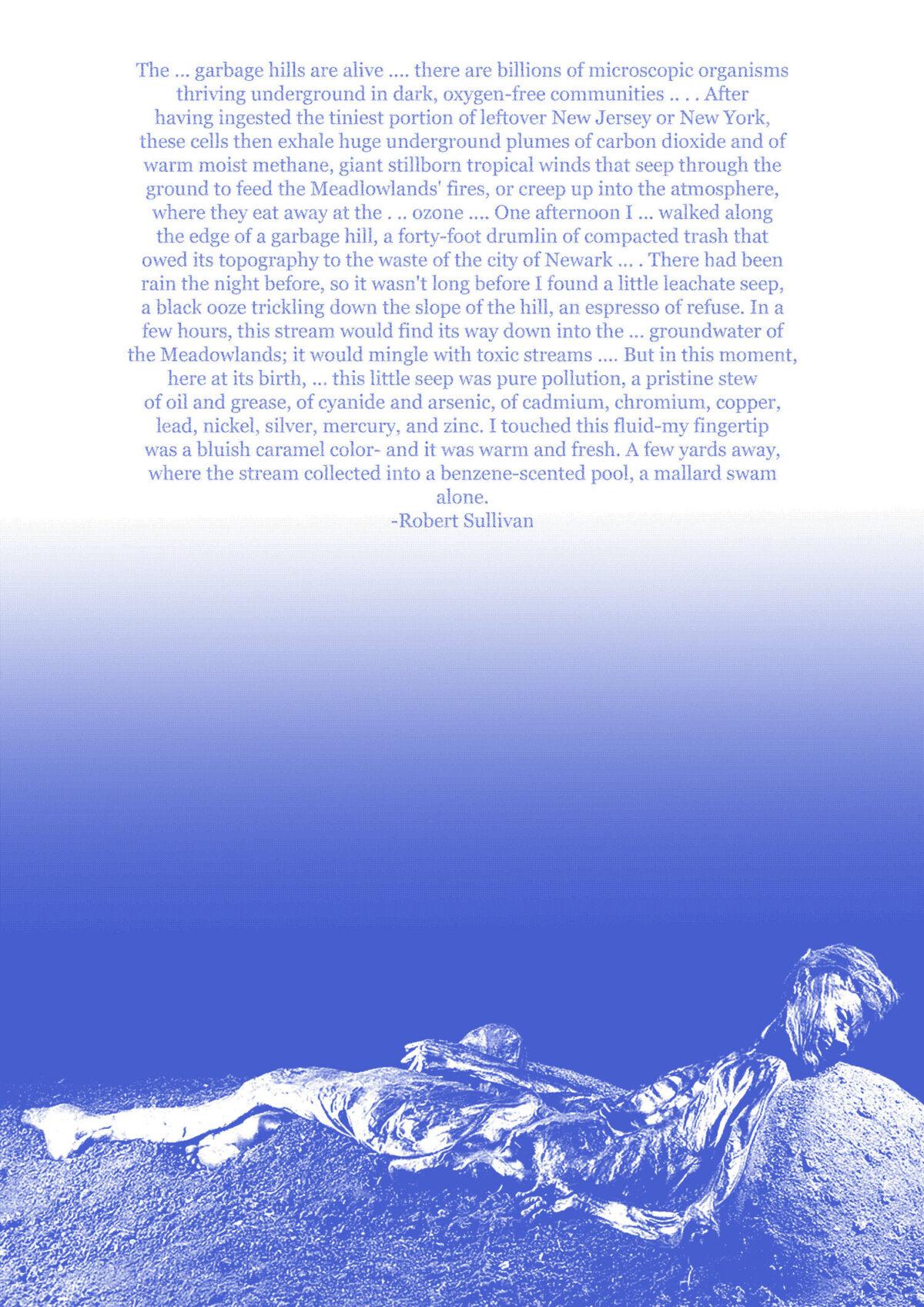 In response to the brief, to devise a public closing event for the exhibition, the Neo Neo Associates devised Salted Findings. Comprising a programme of afternoon occurrences, including The Midden at the Modern – an invitation to picnic and collectively create a nouveau midden, a temporary sculpture of waste; a talk and demonstration by Fiona Morris, a local forager and medical herbalist who discussed a series of common but long forgotten botanicals found in urban spaces; Salted Remains, an artist video screening event which brought together the work of recent graduates Christopher MacInness, Clara Hastrop, Geri Smell and Aideen Doran in a new context.

As part of the closing event, the associates also produced a free take away riso-printed publication for visitors 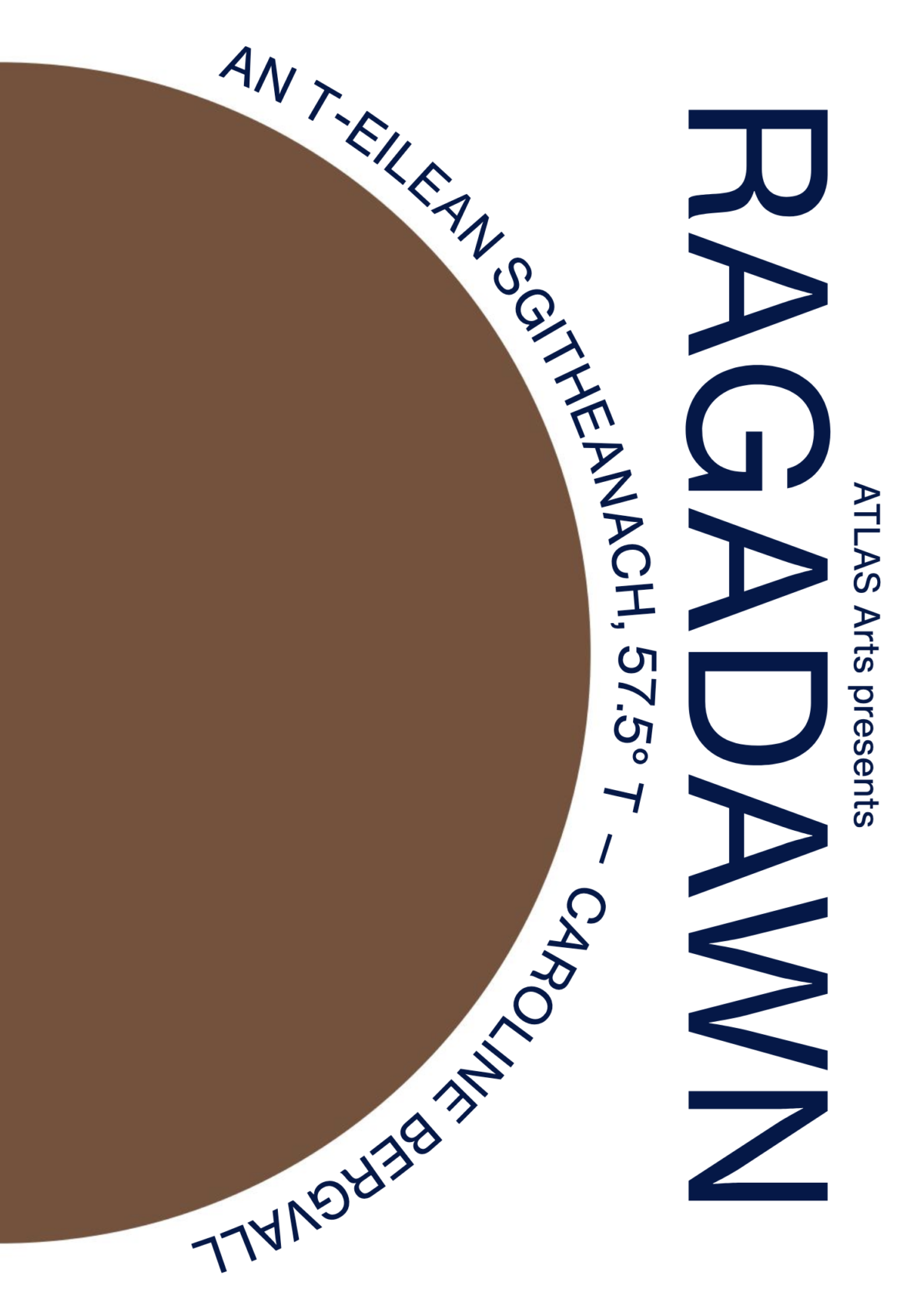 Brochure to accompany Ragadawn (An t-Eilean Sgitheanach, 57.5º T) performed by Caroline Bergvall at Sabhal Mòr Ostaig on 25 August 2018. Ragadawn is a sunrise vocal performance to be performed outdoors from the last hours of night until the very early morning. A multisensory composition for two voices (spoken and sung), multiple languages and electronic frequencies to accompany and celebrate the rising of day. 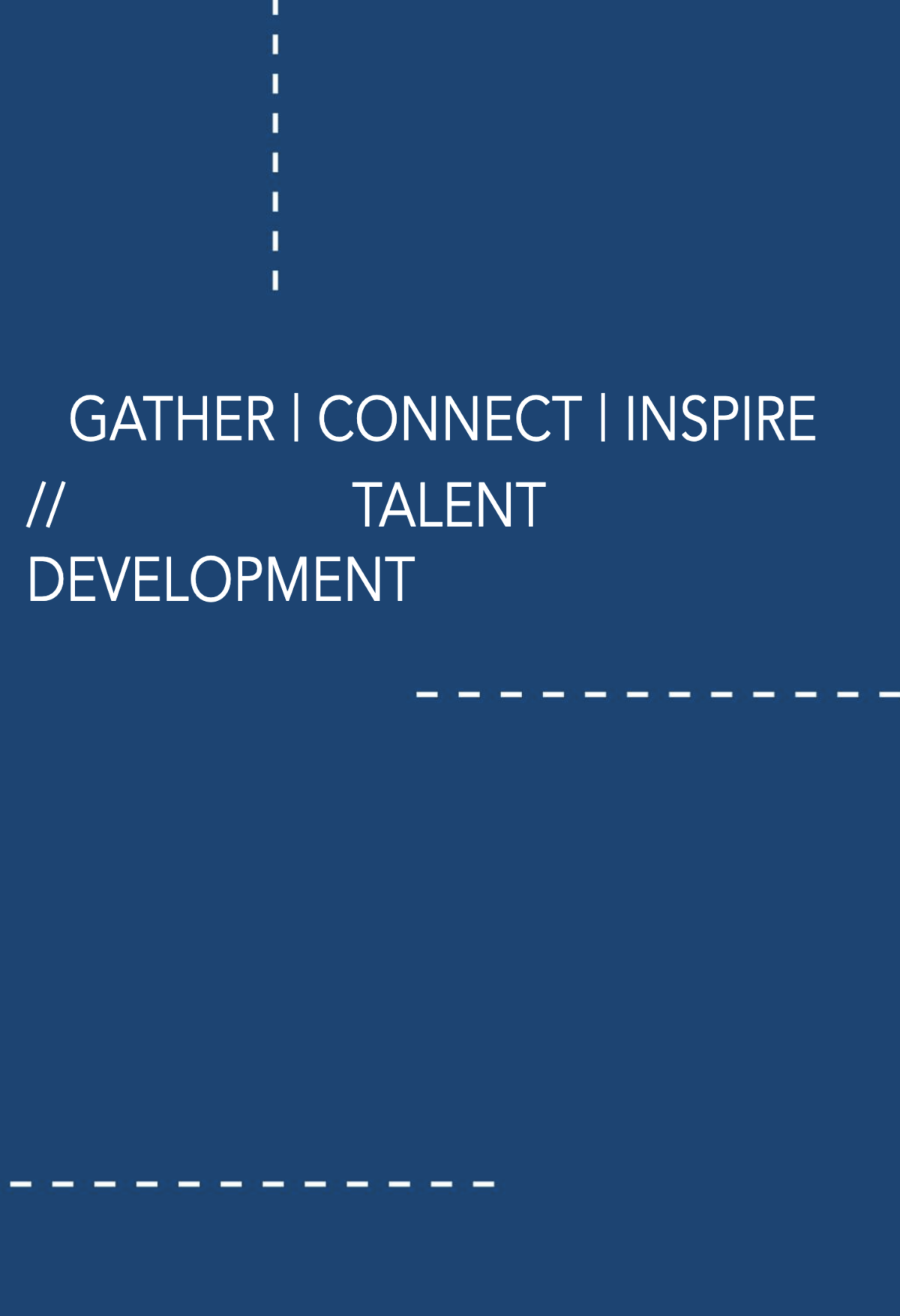 To mark the culmination of the Skye and Lochalsh Talent Development Initiative (TDI), which was celebrated as part of GATHER | CONNECT | INSPIRE 2016, ATLAS produced a free magazine. The aim was to document the event through photography - exploring and preserving the conversations that emerged as part of the project.G 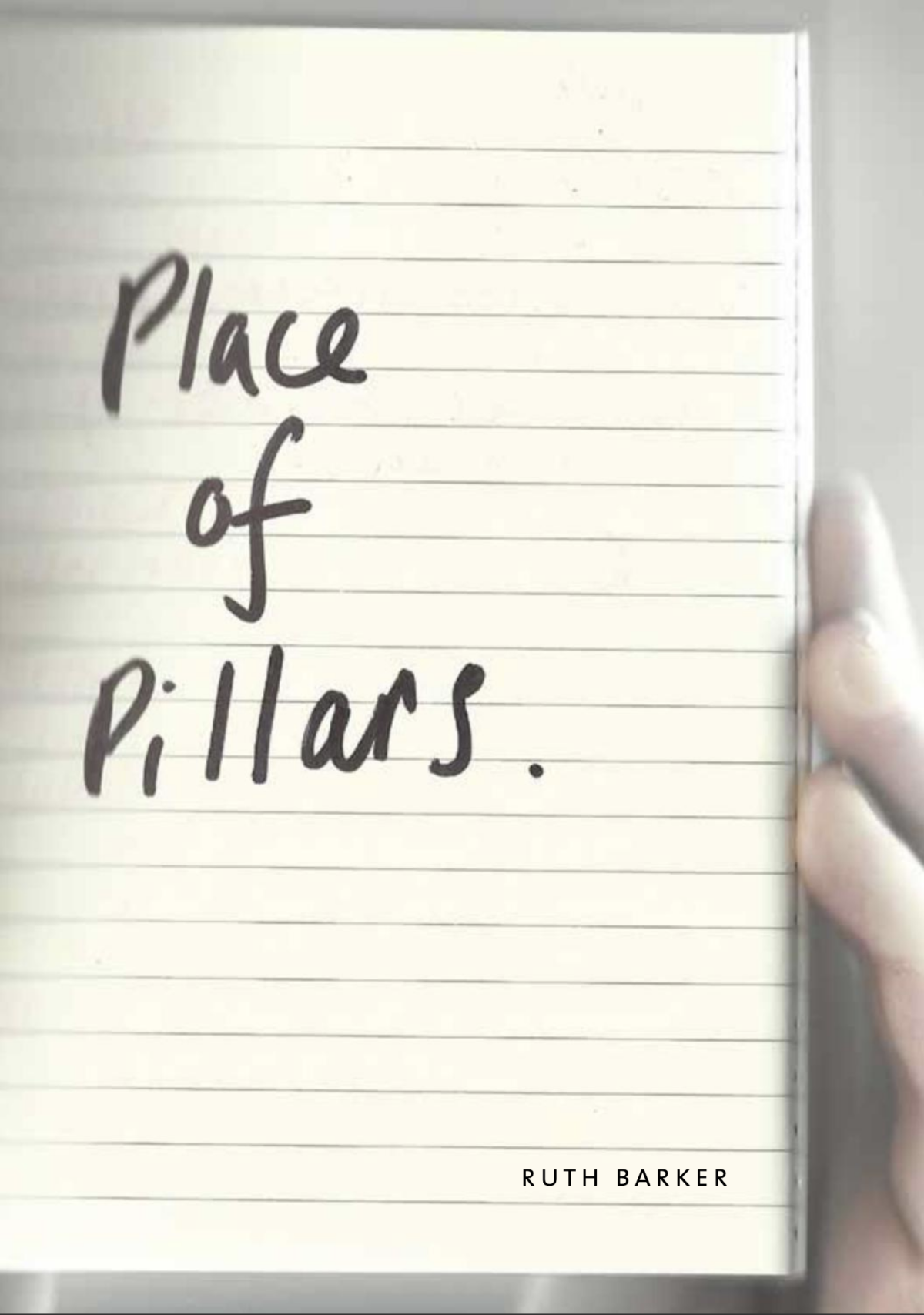 A commission as part of a wider collaboration between ATLAS Arts and Staffin Community Trust exploring the Crofter’s’ Wars in Staffin through local stories and memories. A personal and evocative account informed by time visiting sites and meeting people in the Trotternish region of Skye. 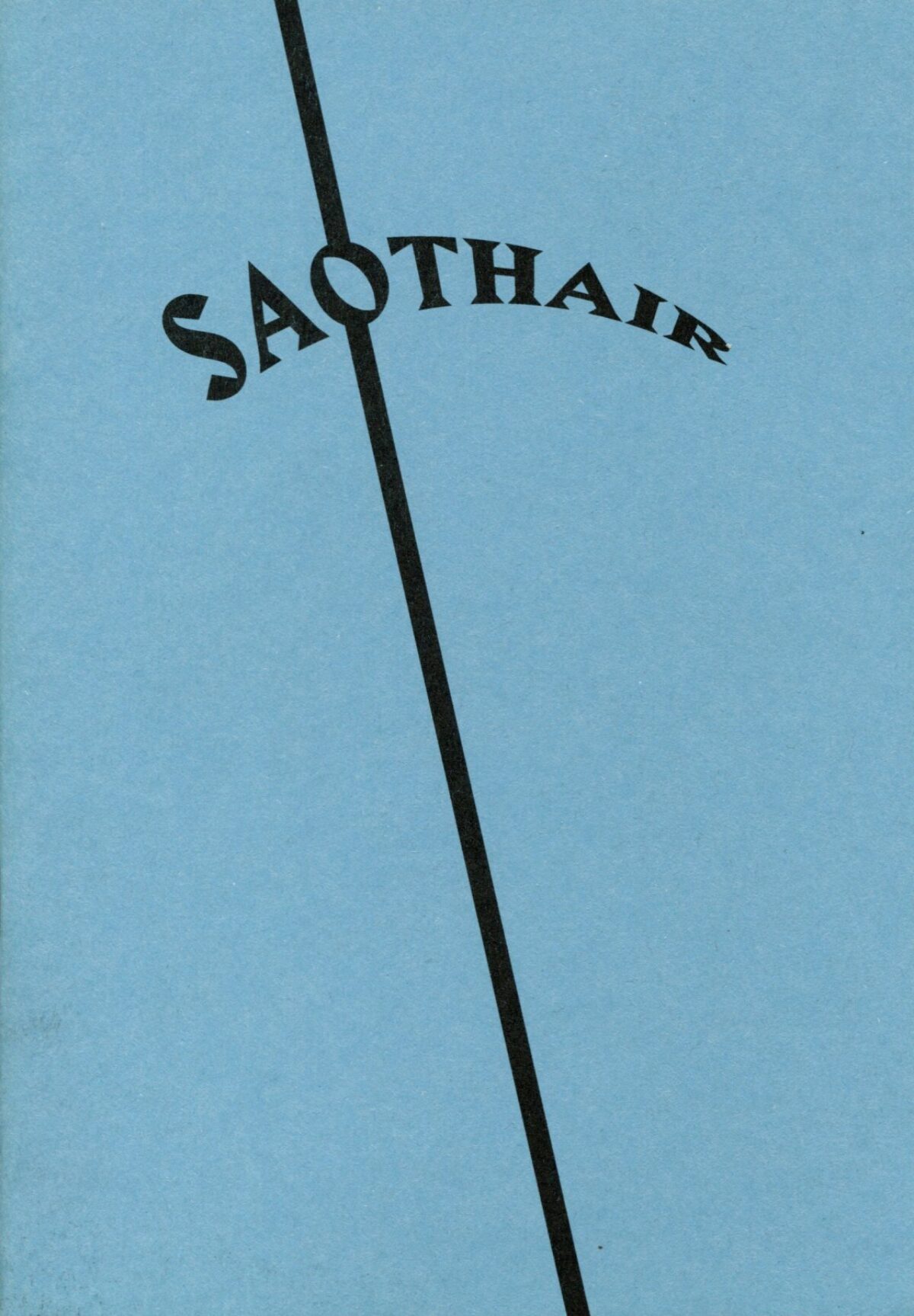 A co-creation between Transit Arts and ATLAS Arts, part of the SCREEN-IT artists’ film screening series. The Gaelic term Saothair translates to labour, work or toil. The publication collects fragments of text and image considering these definitions and their interrelationships. SAOTHAIR took place at Skye Live on 29 and 30 April 2016. 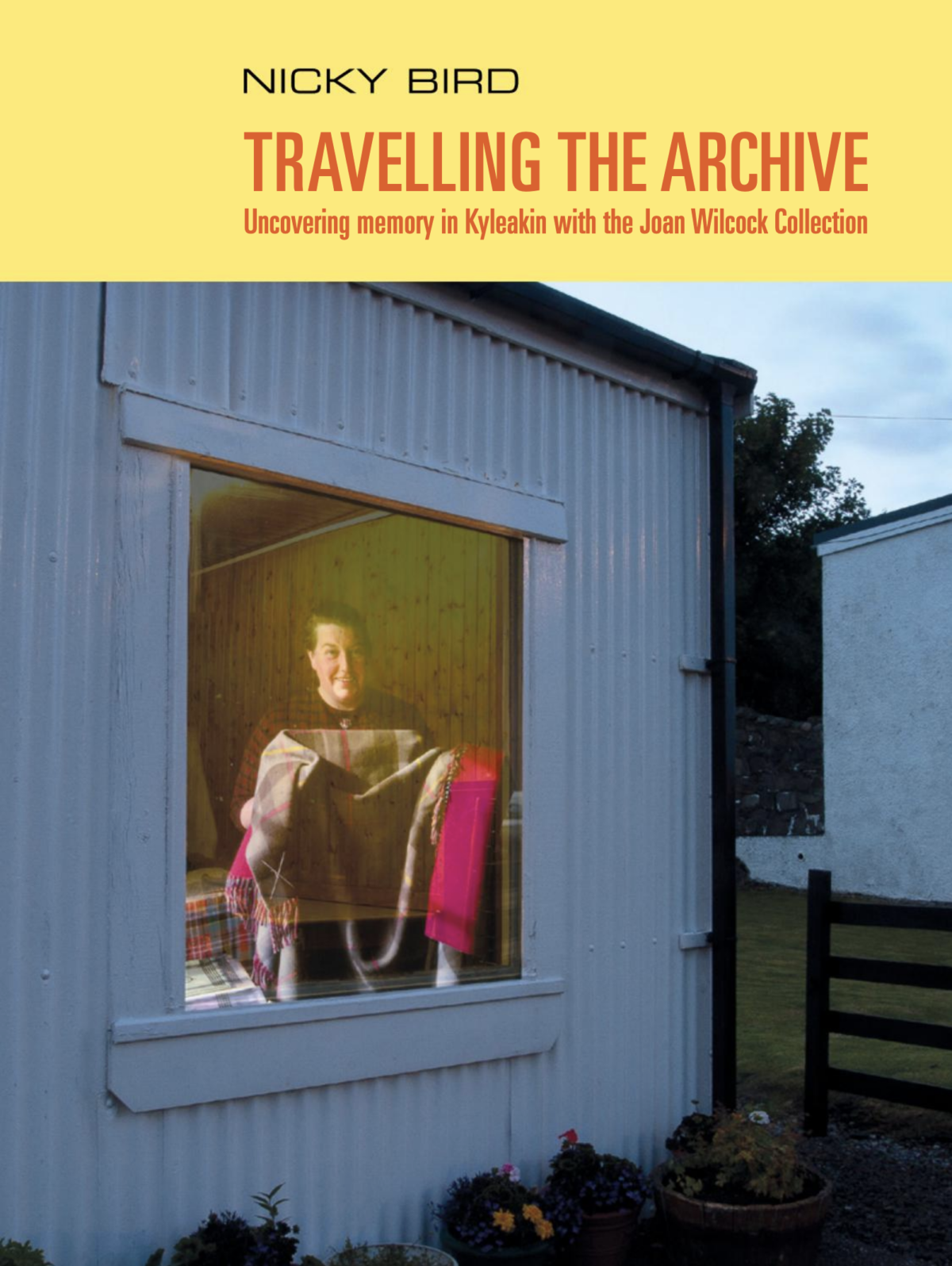 Uncovering memory in Kyleakin with the Joan Wilcox Collection. Travelling the Archive shares the 1960s heritage of the close community of Kyleakin in the Isle of Skye, forming a portrait of this community before the mainland bridge changed its geography and way of life thereafter. 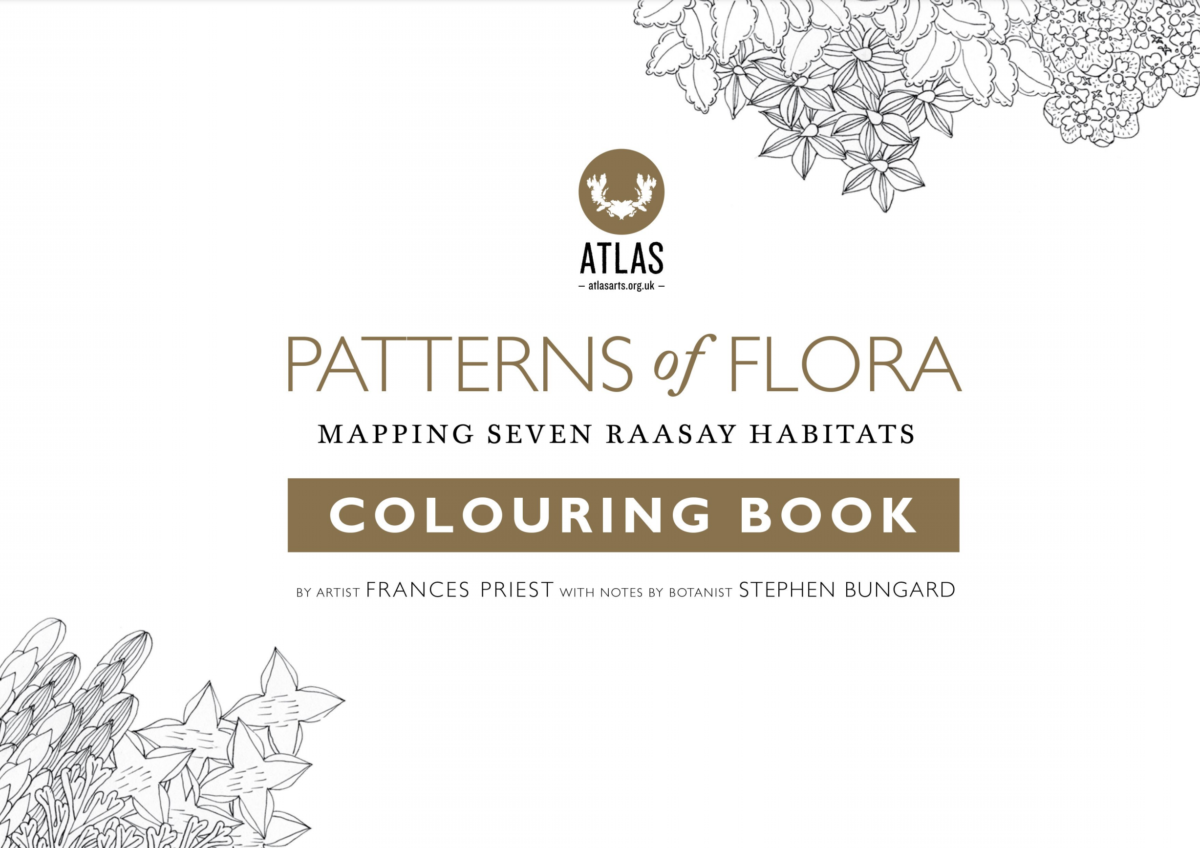 This limited edition colouring book is part of Patterns of Flora | Mapping Seven Raasay Habitats, a 2015 ATLAS Arts project by artist Frances Priest in collaboration with botanist Stephen Bungard. A celebration of the diverse flora of Raasay, it features the original botanical drawings made by the artist of seven different plant habitats.

A specially adapted A4 version of the Patterns of Flora colouring booking is available as a free download for you to print at home. The signed A3 version of the book can also be purchased in the shop. 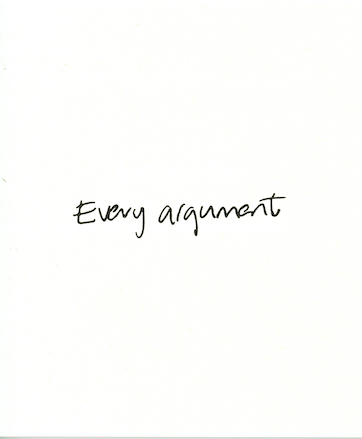 A companion piece for a short film centered around a couple existing within the interstice of Gaelic and English cultures, observing a strained relationship caught between these two worlds, such as the trouble in misunderstanding idioms and language complexities. 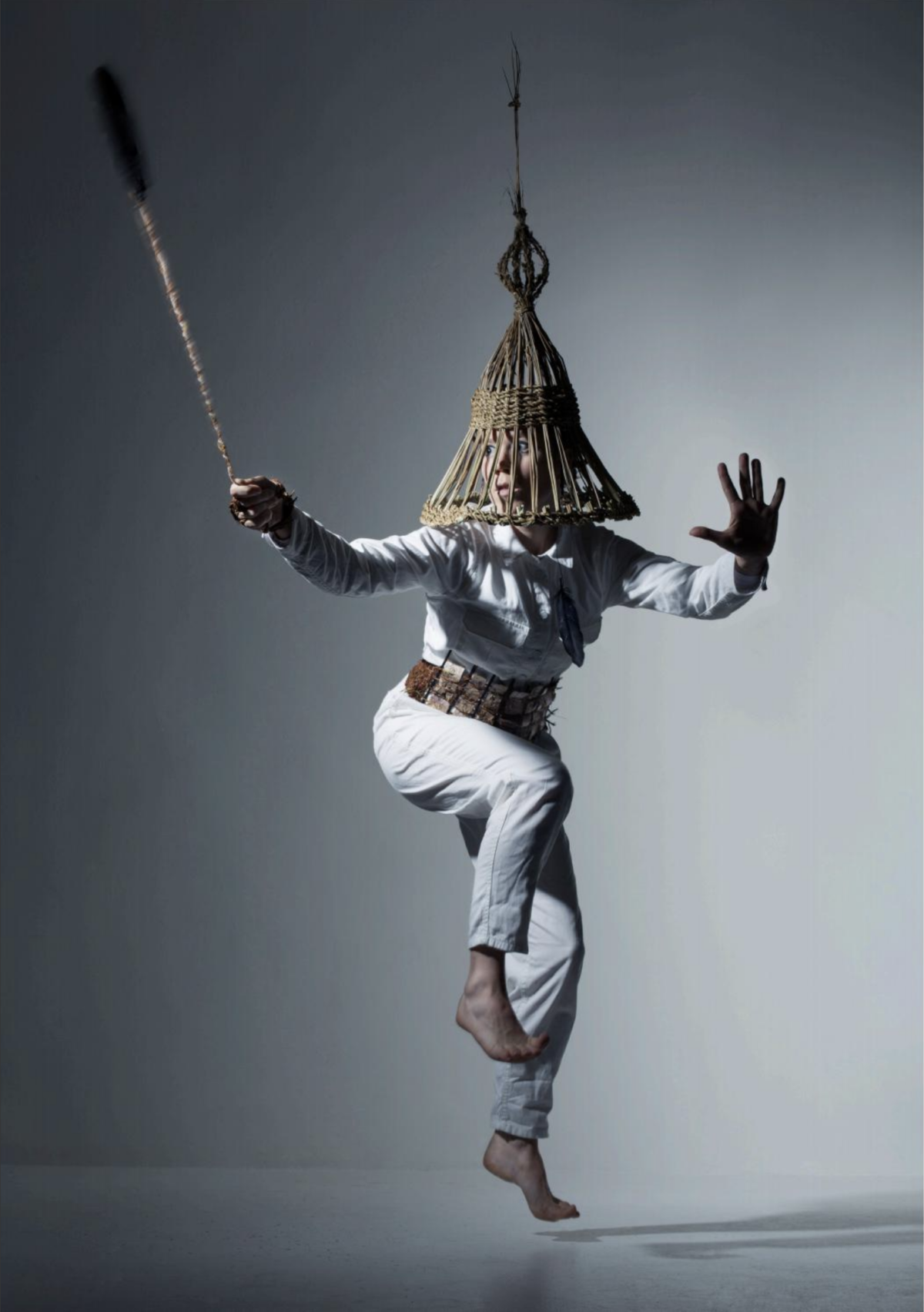 Women of the Hill

Guiding the audience across the threshold, Hanna’s trio of female performers took the viewer on a song-journey through three worlds: Past, Present and Otherworld. Conceived as a contemporary rite, Women of the Hill summoned the young woman interred at the site; the women who ground grain, spun yarn and watched over the hearth; and the female deities – Bride and Cailleach – who, according to myth, do battle each year at the meeting of the seasons. 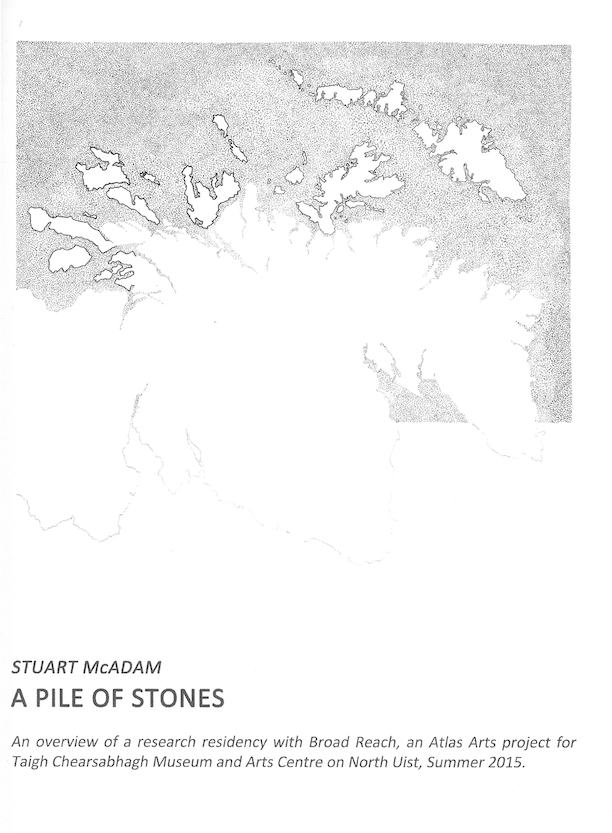 A Pile of Stones 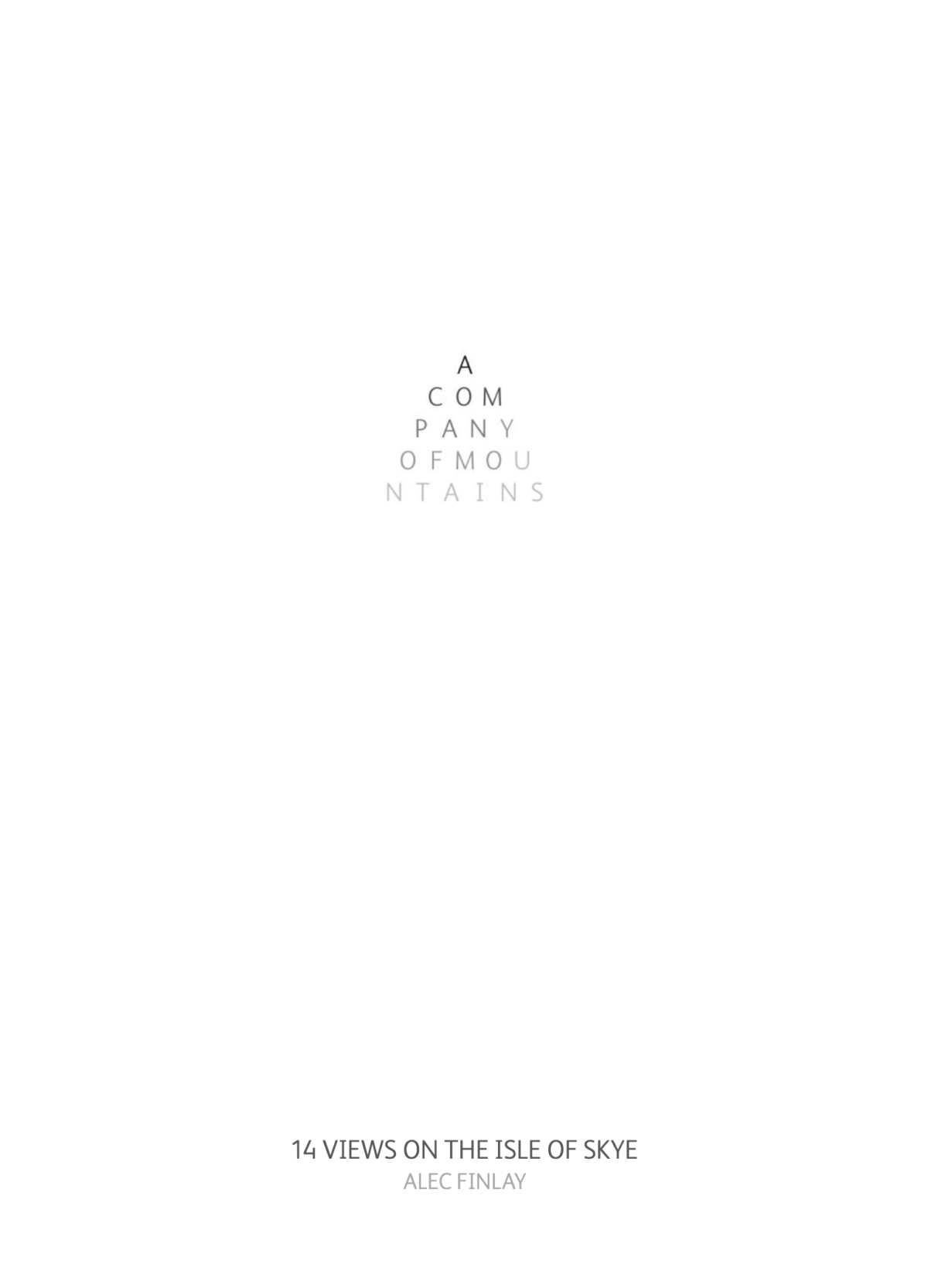 A Company of Mountains

14 conceptuses on the Isle of Skye for viewing hills and mountains by Alec Finlay, commissioned by ATLAS Arts. Alec Finlay’s còmhlan bheanntan | a company of mountains is a collaborative project comprising poems, photos, essays and “word-mntn’ drawings.” The project’s title is taken from Sorley Maclean’s poem “Ceann Loch Aeoineart.” 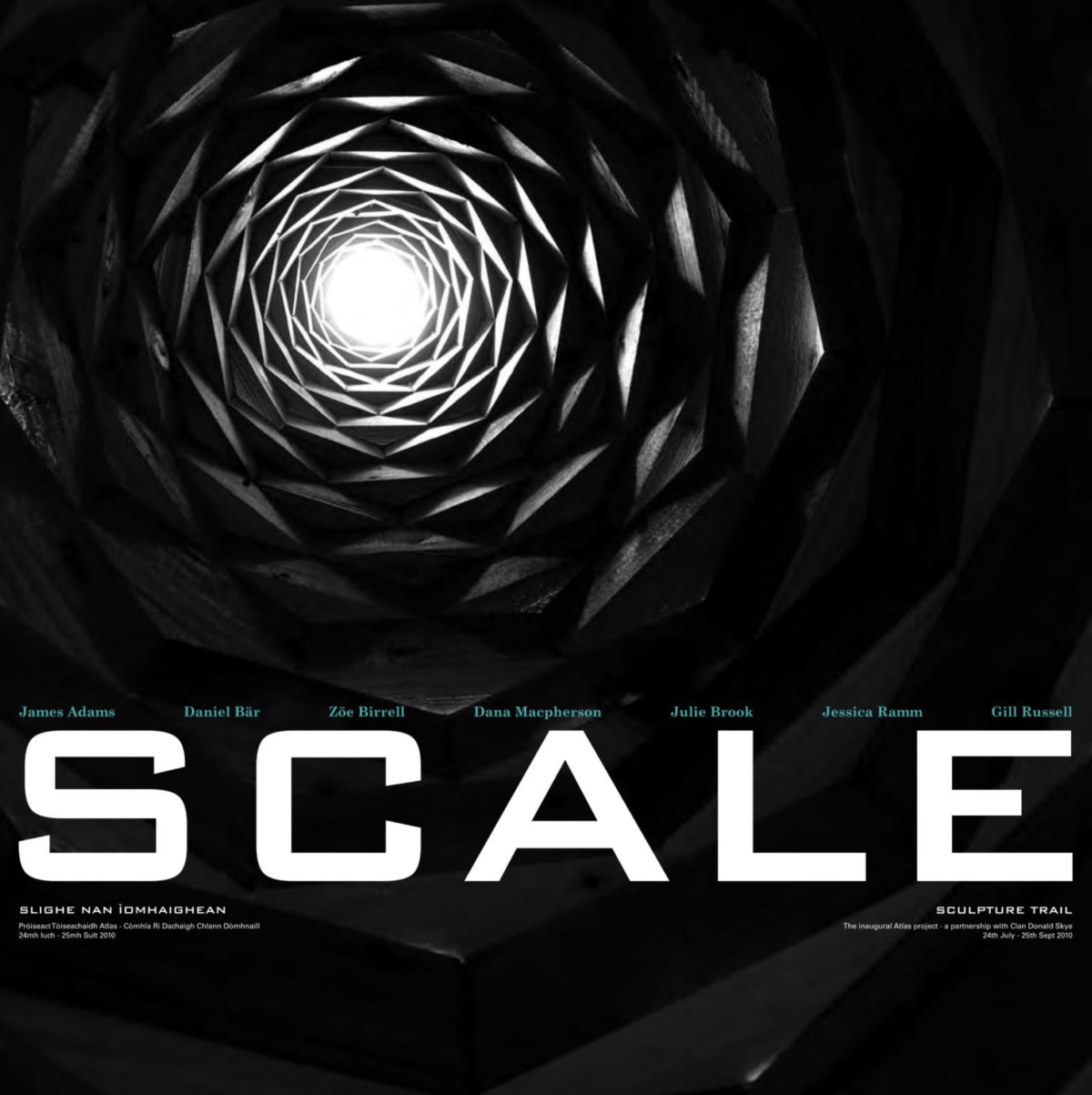 An inaugural ATLAS project. Scale features seven artists working across a range of practices, from sculpture to dance, all connected by their response to the ground of Clan Donald Skye. A series of talks, exhibitions and artist-led workshops.